Skip to content
HomeTradeplus UpdatesWhere is the stop for Dollar?

But at this rate, the rupee could go to even 85/$ was what a fund manager quipped the other day. If the level of 85/$ looks to be too steep, then remember that the rupee has gone from 64/$ to 74/$ in this year itself. But, first, why does dollar strength really matter or why is it a worry for India? Check the rupee chart below. 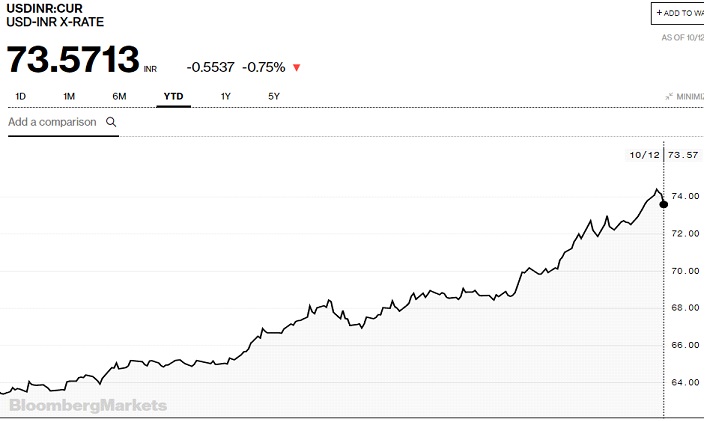 What can stop the dollar rise?

There are two ways to look at this issue. There is the short term approach and then there is the long term approach. The short term approach dictates that the dollar may eventually taper out as even the US cannot afford to have a strong dollar for too long because it negatively impacts exports. Most of the IT companies in the US are already complaining. Also, the dollar strength is more due to the consistently hawkish stance taken by the US Fed. There is already pressure from Trump and others to go slow on rate hikes as it is putting pressure on growth. That means sharp dollar strength from here on is quite unlikely. Let us now shift to the longer term trend.

What is the longer term trend for the dollar?

That will largely depend on how long the dollar continues to dominate as the default currency for world trade and also how long the US dollar remains the preferred world reserve currency. Here are few key points for you to remember when it comes to judging when the dollar rise will stop.

The answer to the long term question is that the dollar is staying as the central currency in the medium to long term too. As of now, there is no visible alternative. For the short term, even the US cannot afford to strengthen the dollar much further. The US realizes that a strong dollar is only enriching the export oriented economies of Asia and Europe and is working against the US companies. The last few months have seen a negative trend in emerging market currencies leading sharp corrections. They have reached a stage when most of the EM currencies are grossly oversold; the rupee included. That could be the good news for the Indian markets.

Option vs Stock. Which one should you buy?
What made US allow India and others to continue buying crude from Iran?
Trade War and its impact on stocks, bonds and currencies
Is market in a bear phase?
Tags:online trading, currency trading