Skip to content
HomeTradeplus UpdatesIs market in a bear phase?

Is this the beginning of bearish phase!?

Nifty corrected 13.25% from an all time high of 11760.20 on August 28, 2018 to 10199.20 on October 08, 2018.  Sensex corrected 12.71% to 34032.25 from a high of 38989.65 on August 29, 2018.    All started on August 13, when the rupee breached the level of 70 against the greenback.  Nevertheless, Indian markets continued its uptrend to make new highs in the subsequent days.  However, markets witnessed small blips in between due to global factors.  But, the momentum was in intact till the IL&FS fallout came to the light on September 21.  Investors sentiment was shattered badly giving way to ambivalence as to the fall in markets is just a correction or crash?  Now, the question whether Indian markets have entered a bearish phase looms large in retail investors mind.

Till now, Indian equity market has corrected only about 13%, whereas a correction of 20% is warranted to term it as bearish phase and fall of 40% to call it a crash.  Whether it is a correction or a crash, it is important to identify in advance, though it is difficult to gauge what is really happening in the economy.  We could only try to co-relate the economic factors that has had an impact historically, not barring the fact that it does not make sense if there is subjectivity in our analysis.  Now let us see about some tools that could help us to alleviate the bewilderment to some extent.

The five factors we going to see are:

Quantum of fall in market index 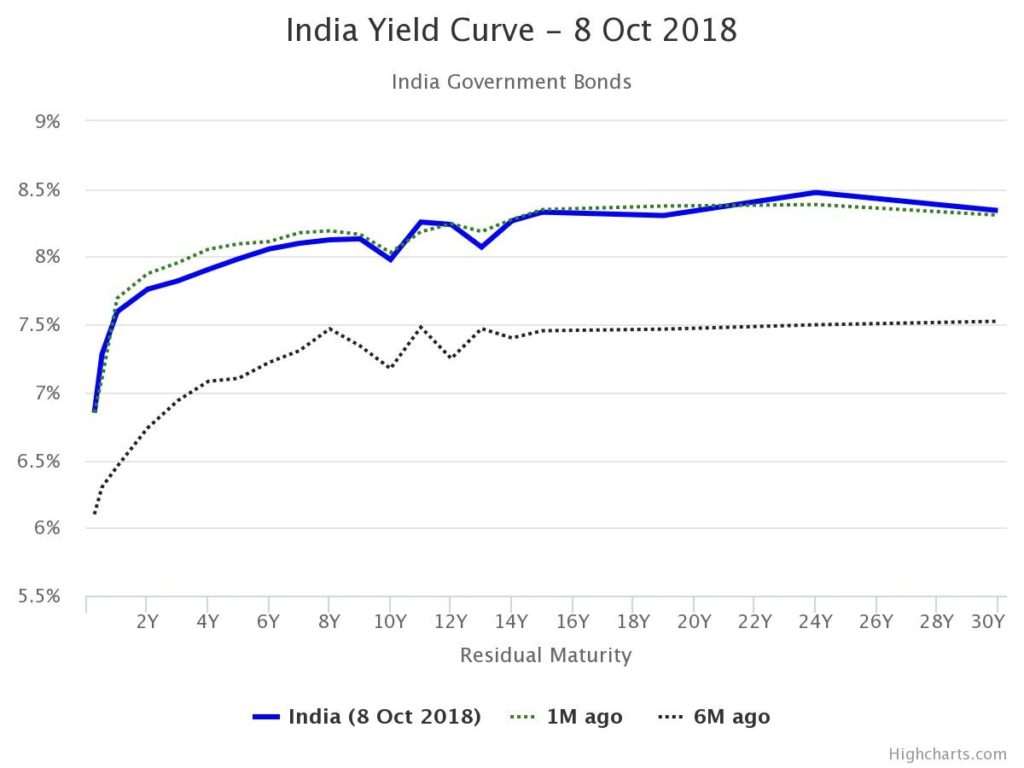 Volatility index have spiked to 21.2125 from a level of 14 on September 7.  The fall in Nifty since then is 12%, whereas the volatility has increased by 51.5%.  This indicates strong bearish activity in the market.  But, we could not ignore the fact that the market was already overdue for a correction.  The  steep fall was event based which could be reversed.  Hence, this offers little evidence to mark this as a beginning of recession.

Historically, Indian stock market has attracted sellers when the market is at a valuation of 25 times or more and has attracted buyers when it was around 15.  If we go by this, we can very well say, the market has turned negative at its appropriate level  when considering the PE of nifty that was 28.72 on August 27.  The market capitalization to GDP ratio is one indicator used to identify the impending reversal in the market.  As on July 2018, market capitalization to GDP ratio was 80% as per data compiled by Motilal Oswal Securities.  A reading above 100% indicates over-valuation and a reading below 80% indicates under valuation of stock market.   However, some argue that this ratio is irrelevant to India as the contribution of earnings from listed corporates to GDP  is very less compared to its contribution to GDP in developed economies.

Recently, Standard & Poor (S&P) and Fitch, both have assigned a BBB- rating to India.  This is a speculate grade and it implies that the country is vulnerable to changing economic conditions and could face big difficulty if economic conditions decline.  However, the macro economic indicators such as GDP growth and Inflation are still in tact.  India’s GDP growth has recorded 8.2% and inflation decreased to 3.69% in August 2018 from 4.17% in July 2018.  Nevertheless, the rising crude prices and weakening rupee still poses biggest threat to continuing economic growth.

Quantum of fall in market index

As I have already mentioned, the fall in market index so far is well below the threshold of 20% to conclude that the market has entered a bearish phase.  Till October 08, market has corrected by just 13%.  The indices have fallen with runaway gaps which indicates the downtrend is already half way through.  Usually, this implies that the further fall is imminent to complete its correction.  However, the market movement has to be watched closely for any reversal in the trend.

The factors considered to identify a bearish phase or a recession, gives a mixed picture.  While fundamental factors such as flattened bond yield curve and threatening crude prices and weakening rupee signals impending sluggishness in the growth of the economy, the valuation and volatility which  is something more related to investor sentiment was damaged severely during the fall in the market that was witnessed in last one month.  However, putting all the pieces together, we can say that it is premature to conclude that Indian stock market has entered a bearish phase.

Have mid-caps corrected enough or is it good to stick to large caps?
History of shocking top management exits
Where is the stop for Dollar?
Margin Trade Funding enabled in INFINI POWER
Tags:online trading, trading online